Published on March 19, 2014 this episode of the Falmouth Community Television’s program -Village Green, hosted by Davidson Calfee and Kakani Young, features the Dream Tale Puppets, The Cape Cod Curling Club and coverage of the Falmouth Museums on the Green's event for the 200th Anniversary commemoration of the Nimrod's bombardment of Falmouth.
Posted by Dream Tale Puppets at 7:23 PM No comments:

"From Poland to America: My Life in Puppetry and Theatre" - Notes on the Presentation at the Boston Area Guild of Puppetry Meeting


In May, 2013, my puppetry and work in and US were the subjects of a program which I presented for members of the Boston Area Guild of Puppetry at the Puppet Showplace Theatre in . The following notes on the presentation were taken by Gail Kearns, a BAGOP guild member. They appeared in the July, 2013, issue of "The Control Stick", newsletter of the guild.  Thanks to Gail for the permission to use the notes here.


The May program was presented by ’s Jacek Zuzanski of Dream Tale Puppets. It was entitled “From Poland to : My Life in Puppetry and Theatre.” Jacek talked first about the concept of “wonderland” and of the theater as a “gateway” or means of passage into this “wonderland.” Jacek, while not religious, does believe in “wonderland.” He has recently been given space for his studio and children’s classes in the in , where he is now teaching children and others how to create “wonderland” for themselves.


Jacek says that there are two layers to think about when creating one’s own theatrical gateway into “wonderland.” The first layer is that of the story and which stories you choose to tell. The second consists of the tools that one uses to create the “passage” into “wonderland.” These include dance, puppets, movement, and more --- whatever helps; all are ways to reach “wonderland.”


You the artist are always going to be the “hero” in the wonderland you create. But language is also important, and Jacek talked about the significance of language. Our cultures have different languages. And the language of the puppet arts is also complex and rich in its many forms. How are we to manage using language to gain entry into our “wonderland”? Jacek says that one way to do this is by giving life to one’s puppets. Working with puppets has taught him how to pass through the theatrical gateway.


Another key word when thinking about theater is “community.” Creating community and being part of a community can be another means of discovering “wonderland.” You work with others to find a common passion. And while telling one’s story, there really is no “I” in it because in working with others, the story has become “our” story; this is the “paradox of ‘I’” in the theater.


Jacek first began learning theater while in high school in in an afterschool class in pantomime theater. Pantomime is “theater of the body.” This class led to an apprenticeship for Jacek in the professional Wroclaw Mime Theatre, which is known throughout the world. Here, Jacek worked with Henryk Tomaszewski, the founder and director of the theater. Jacek also studied in a puppet theater in the south of called “Jeleniogorski Teatr Animacji,” or “Animation Theatre of Jelenia Gora.” Founder and director of this theater was Andrzej Dziedziul, who had begun his career working as a solo performer with dramatic texts using objects and props to represent characters. Shakespeare’s Hamlet, e.g., was performed with bottles that represented the characters in the play.


Jacek drew a contrast between the way puppetry is taught here in the and how it is taught in . In the student starts by learning the skills and arts of acting, and then of acting with puppets. LOTS of time in is spent on acting skills and on using the body in motion.


Also, most Polish puppetry projects are done as whole class or as group projects rather than as individual projects. Here in at the , Jacek said, students begin with making puppets and creating their own shows. But creating one’s own show was only one of the final projects completed while studying the arts of puppetry in .


Jacek also participated in projects conducted by the actors of the Theatre Laboratory of Jerzy Grotowski in the south of . In Grotowski’s Laboratory Theatre, there was not much puppetry done at all. Jacek told us of projects of the theater from the 1980’s in which groups consisting of actors and non-actors created and performed unscripted experiential activities without audiences. These projects were created to enable participants to reach the potential of their creative and physical abilities. The creators of these projects developed techniques for building intensive awareness of all who were involved in the process. Learning was about what group members were able to do together with their bodies and minds. The quality of the interactions between participants and always climbing to reach one’s potential as part of the group was always the basic goal.


Jacek  also studied with Grotowski’s actors, who were all instructors in the physical style of acting that had been developed at the Grotowski Laboratory. Jacek was reminded of how diverse his training had been when he saw one of Margaret Moody’s puppet shows. In her puppet shows, Margaret uses Chinese hand puppets with the Chinese hand puppet manipulation skills that she learned in from Li Tien Wu. This, Jacek said, is a language of hand puppetry  that uses the puppeteer’s hands in ways that are quite different  from the language used by puppeteers from Western cultures, despite the fact that the puppeteer’s hands are used as the bodies for the characters in both cultures. In much the same way, the physical body skills that Jacek learned are used with his puppetry to create a different orientation to puppetry.


One of Jacek’s teachers was Jan Dorman, who used puppets together with the rituals and games of children’s play activities to create puppet theatre. Dorman’s highly stylized puppet shows were created like musical compositions. A variety of literary materials were used and adapted for desired theatrical effects. The acting was stylized and included the use of masks and other objects in performance as well as puppets.


Jacek also told us briefly about some of his own artistic projects. In the earlier years of his career, he produced and performed his own puppet shows in southeastern . He also taught acting and puppetry in a variety of cultural centers, museums, schools, and theaters, and he designed sets and puppets and directed puppet shows for municipal puppet theaters in and Jeleria Gora. He founded the Group of Theatrical Actions Association and TEART. Through these groups, he worked with artists and actors to create puppet shows, parades, outdoor shows, street theater productions, and workshops for children, youth, teachers, and international groups.


Jacek gave us a brief demonstration of how he combines body acting with puppetry. In his Dream Tales Puppets version of “Rumpelstiltskin,” he uses tabletop puppets with the puppeteer fully visible for the audience. The puppeteer is both actor and puppeteer, and the bodily actions of the actor, which were quite exaggerated and dramatic, contributed much to the effect of the scene that he performed for us. In Jacek’s “Jack and the Beanstalk,” hand puppets, marionettes, inanimate figures, and masks were all used in performance with minimal costuming (such as a bonnet) to represent a character. By exchanging simple costume items, characters are able to be easily changed by a solo performer within a performance.
Learning how puppeteers are trained and how puppetry is learned and conducted in different parts of the world contributes much to how we are able to understand our own traditions and add to our own skills. More of the work of Jacek’s Dream Tale Puppets can be found on his website at www.dreamtalepuppets.org. Jacek and Dream Tale Puppets will also be offering a one-week puppet camp class for children through and at the Puppet Showplace Theatre in July.


Posted by Dream Tale Puppets at 7:10 PM No comments:

Have you ever considered learning to act with puppets? Would you like to learn new ways to play with your kids? Or maybe you are interested in developing your expressive skills? Please consider joining and please spread the word about Acting with Table Top Puppets at Puppet Showplace Theatre 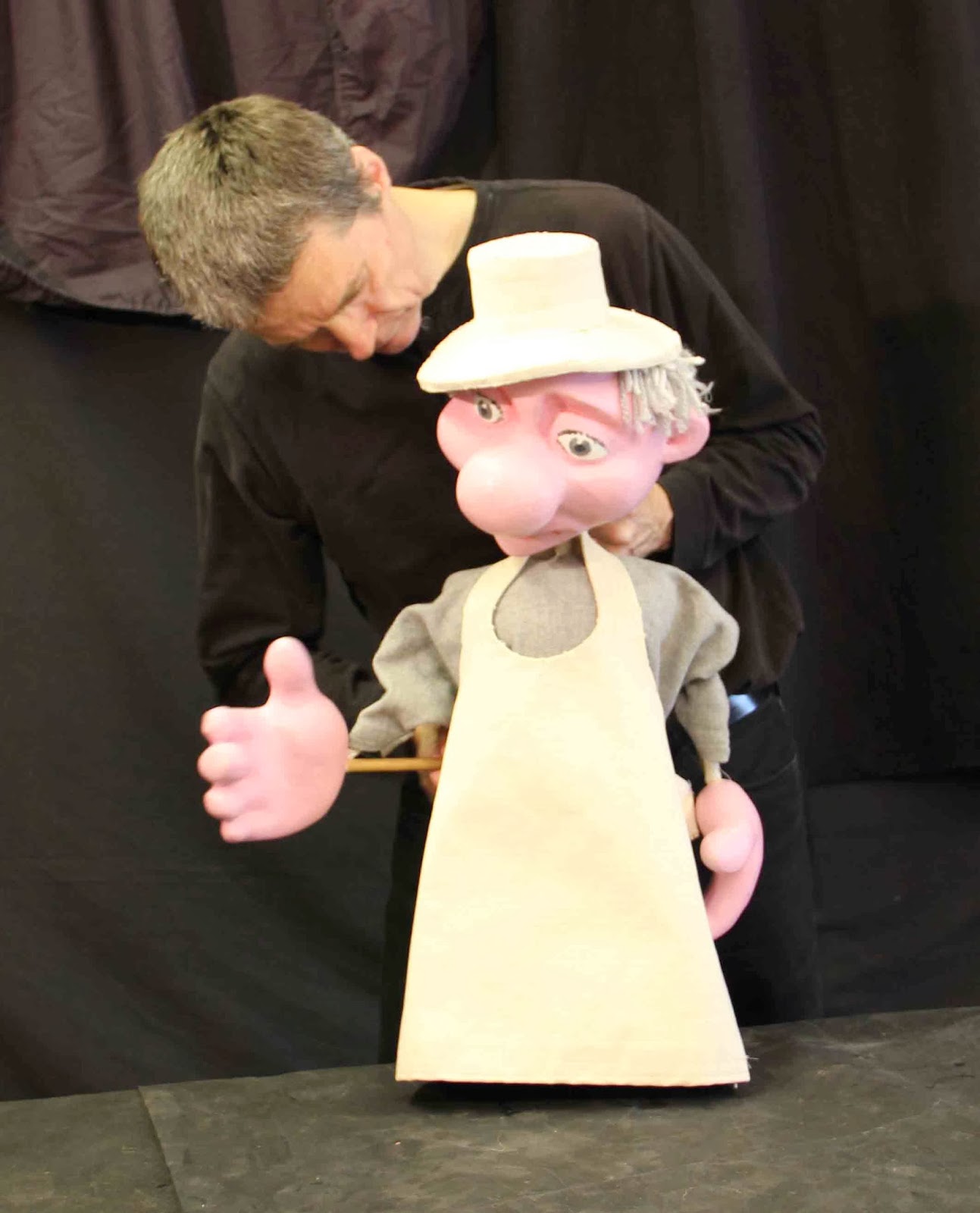 Table top puppetry is a unique performance style that enables a human performer to bring a puppet character to life in full view of the audience. This powerful art form requires both physical precision and an extensive vocabulary of expressive movements that trigger the imagination.

In this hands-on, exploratory workshop, participants will build their awareness of the actor/puppet relationship through a series of fun and challenging exercises with professional table top puppets. The class will explore the paradox of mutual control, whereby the puppet controls the puppeteer as much as the reverse. The class will practice core manipulation skills and explore performance techniques that unify actor and puppet, including breath, focus, footsteps, balance, and posture. The class will then apply these learned skills to devise their own unique solo and multi-character scenes.

This is an intermediate level workshop: some familiarity with puppetry, acting, or dance/movement is recommended. Although the class focuses on a very specific performance situation, the workshop is for anyone interested in broadening their puppetry performance skills in a supportive and detail-oriented environment.
Posted by Dream Tale Puppets at 7:39 AM No comments: